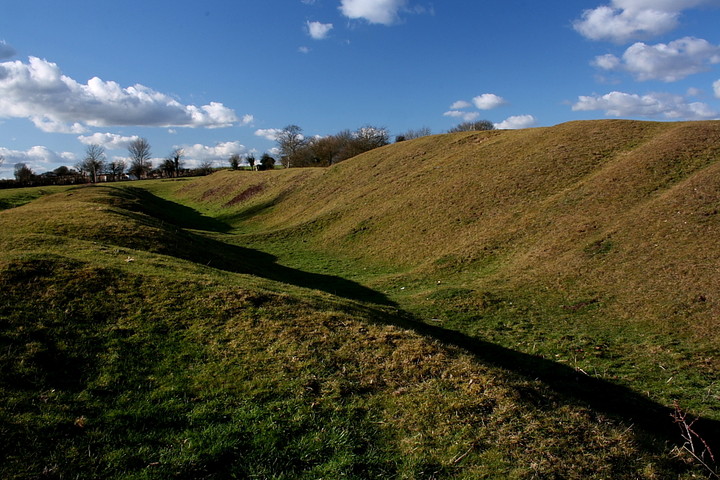 Clare is a small, ancient town on the River Stour. Its history is rich and varied, dating back to prehistory. But of particular interest is the enigmatic earthwork known as Clare Camp, a rare feature of Sacred Suffolk’s landscape.

Towards the north of the town sits Clare Camp, an elliptical earthwork enclosing an area of roughly 12 acres. Formerly named Erbury (which means ‘earthen fort’), it consists of a double-banked ditched enclosure, with ditch walls measuring up to 14 ft in places.

Clare Camp is essentially undated. It may be prehistoric (tools from across the stone age have been found in the vicinity); it may have Viking origins; but generally it is classified as an Iron Age fort (although not a hill fort.) It was certainly situated in a frontier location, originally on a spur surrounded by wetlands overlooking the Stour.

The Trinovantes, one of three Celtic tribes that dominated Iron Age East Anglia, may have been responsible for its construction. The earthwork sits at the edge of their territory, defending against attacks from the Iceni to the north and the Catuvelaunians to the west.

In conjunction with a line of frontier defences further northeast known as the Great Ditches (which include Devil’s Dyke), the River Stour protected the East Anglian plain on its most vulnerable aspect from western marauders. Clare Camp’s location made it an important strategic link in that defensive chain.

At the time of Domesday, the town was owned by a Saxon thane called Æflric. Following conquest, the land was redistributed to the Norman noble Richard fitz Gilbert de Bienfaite, later to take the name Richard de Clare. The Lords of Clare established a motte and bailey castle further south towards the Stour, echoing the defensive function of Clare Camp.

There is much more to see in Clare. The Ancient House Museum is immediately recognisable from its ornate plasterwork. Clare Priory is one of the oldest religious houses in England. The church of St Peter and St Paul dates from the 13th century. The motte and baily castle within Clare Country Park provides good views of the town, and three real ale pubs can help quench your thirst after.

It forms part of a small cluster of ‘Burghs’ in the same area, with Babergh (Bab’s fort) in nearby Acton, Chedburgh (Cheds fort) and of course the ‘South Burgh’ of modern day Sudbury. It is likely that Sudbury was the first in the locality, and gained it’s pre-fix with the emergence of the others and of course Bury St Edmunds just 13 miles away from it.