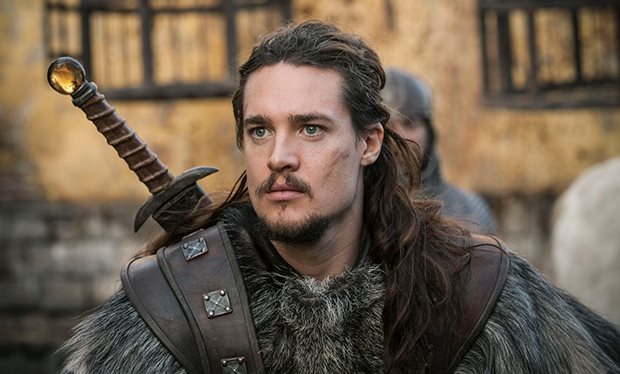 Have you been watching BBC2’s historical drama The Last Kingdom? Based on the ‘Alfred’ sequence of books by Bernard Cornwell, the series charts the adventures of Uhtred of Bebbanburg – born a Saxon but raised a Dane, who ultimately becomes warmaster to King Alfred.

Last night (episode two) featured our very own King Edmund of East Anglia, portrayed by actor Jason Flemyng. The Danes have invaded East Angli and Uhtred travels there, seeking support from the Viking Jarl Ubba. Edmund is first mentioned in the royal court of the House of Wessex, when King Æthelred decides not not send troops to support the East Anglians. Later, when Uhtred arrives in ‘Beodericsworth’ (Bury St Edmunds), Ubba and his cohorts are found entertaining themselves in (presumably) Edmund’s hall; the king, clean-shaven, short-haired and wearing what looks like a habit, is tied to a cross, looking fairly bloodied. 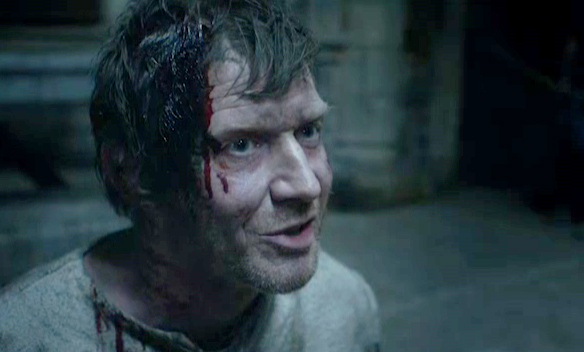 Edmund agrees to become Ubba’s puppet king on the proviso that the Vikings convert to Christianity. Ubba spies an icon of St Sebastian and decides to test out Edmund’s faith by shooting him full of arrows; his argument is: if the Christian God is so powerful, Edmund would surely be saved. In a moment of gallows humour, Edmund promptly withdraws his demand for conversion and points out that he would only survive being riddled with arrows if it was God’s willl; in St Sebastian’s case it was clearly not. Nevertheless, Ubba is insistent – his archers shoot Edmund who, unsurprisingly, dies immediately.

There are obviously a few contradictions in the scene compared to the core Edmund myth: Edmund was traditionally tied to a tree, not a cross; his place of death was certainly not Bury St Edmunds; it was possibly Hoxne or Bradfield St Clare. The series deviates from Cornwell’s work somewhat too; in the book, Uhtred only hears about the death of King Edmund, rather than witnessing it first-hand.

Despite all this, it was pretty exciting to see King Edmund (and Bury) portrayed on TV, even if Edmund came across as a bit of a wimp.

I think I watched about ten minutes of the first episode, seeing the Hollywood costumes and the expected ‘dialogue’ between the child actor and the other cast members made me think for a second I’d turned onto a kids show. When the Danes could ride up to the huge citadel with a head, and make it back to the woods without being ridden down I turned over. I confess I’d read the section in one of Bernard’s books that details the King and was extremely unimpressed. He made him appear quite ‘wimpy’ when in reality Edmund was involved in some ‘cross border’ warfare whilst in overt treaty with the Great Army. He also held the field at the first Battle at Thetford before being overwhelmed by the seaborne force and was on his way to link up with the East Saxons before being caught up with and murdered. I’m intrigued though by the depiction of Bedricsworth on the programme. Did it ‘rival’ that collection of fantastic buildings shown in the first episode?

Of course he came across as a bit of a wimp. He was English and this is the visual media at work.

Also, what’s with the Norman haircuts, 13th century armour and rectangular shields? The English would have look hardly any different from the Danes.

Yep agreed on both points: it’s fair to say Edmund was a capable warrior-king, even based on the scant evidence. Later tales flesh out this side to him, in contrast to Abbo’s portrayal as a timid and pious regent.
It winds me up how both Last Kingdom and Vikings depict the Anglo-Saxons as clean-cut sticks-up-their-arse bureaucrats – or inept warriors with crap outfits. Maybe the upcoming Beowulf series on ITV will be better?

I feel that to really know about a long ago place of century’s of the past Bury St Edmunds , is to have a insight back in time, of the long departed souls that walked them grounds of Forrest and lands,hills and valleys as they fought hard in century’s ago .

The blood of the ONES of century’s ago of Bury St Edmunds shall always be in the Land until the end of time, as this message comes to me and now for you , from the spirit world.