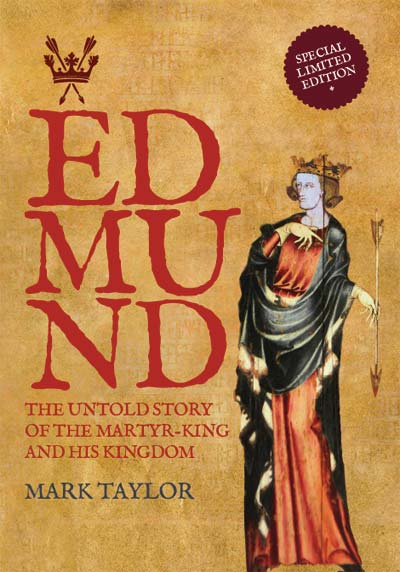 New book about St Edmund profoundly changes our understanding of the East Anglian king and martyr.

‘Edmund: The untold story of St Edmund and his kingdom’ is a new book, available at all global Amazon sites. Its release, coinciding with the campaign to reinstate Edmund as England’s patron saint, will help settle the debate in Edmund’s favour once and for all.

The book’s release is also supported by a new website: secretsuffolk.com, which includes a gazeteer of important and ancient places in the county, many of which are connected to Edmund.

Author Mark Taylor, says of ‘Edmund: The untold story of St Edmund and his kingdom’:

“There’s no better time to re-examine Edmund’s story.  What makes this book different is the way it interprets his death and martyrdom in the context of Anglo-Saxon and Germanic ideas of kingship. These ideas were themselves derived from earlier traditions linking the king with divinity, the land, and fertility. The book’s conclusions profoundly alter our understanding of how Edmund was regarded by his contemporaries.”

In ‘Edmund: The untold story of St Edmund and his kingdom’, the mythic symbolism of each aspect of Edmund’s martyrdom is illuminated, supporting the  interpretation of Edmund as a divine sentinel-king in the tradition of other national heroes.

The book explores the role of the Bury St Edmunds as the seat of a hero’s resting-place, showing how the town conforms to a symbolic plan with Edmund located at its centre.

Finally, Edmund’s imprint in the land surrounding Bury is investigated, reinforcing his role as a sacral king who is bound to the welfare of the land and the people.

Like King Arthur, Edmund epitomises the timeless mythical assertion that the king and the land are one.

About the author: Mark Taylor was born and bred in Bury St Edmunds. He has been interested in Suffolk history, places and folklore for many years. ‘Edmund: The untold story of St Edmund and his kingdom’ is the culmination of years of research into Edmund’s story. He studied English and Philosophy at the University of York, and is also responsible for the ‘Secret York’ smartphone app, available for download at Apple and Android app stores.

A quality website about a quality subject – thank you.

Several weeks ago, i compiled the following having read the legend about St Edmund going to Hunstanton to learn the Psalter by heart.

It is an acrostic formed of appropriate quotes from the Psalms in the spirit of St Edmund speaking to us today… replete with the Essence of timeless Mystical Paradox – another way of saying with Julian of Norwich “All shall be well”.

THE PSALM OF ST EDMUND

With all good wishes – and thanks.

THE END OF THE KINGDOM of EAST ANGLIA | joemasonspage

[…] is a new website on Anglo-Saxon history with particular detail on St EDMUND. CLICK HERE  to find out more on the book St Edmund The Untold […]