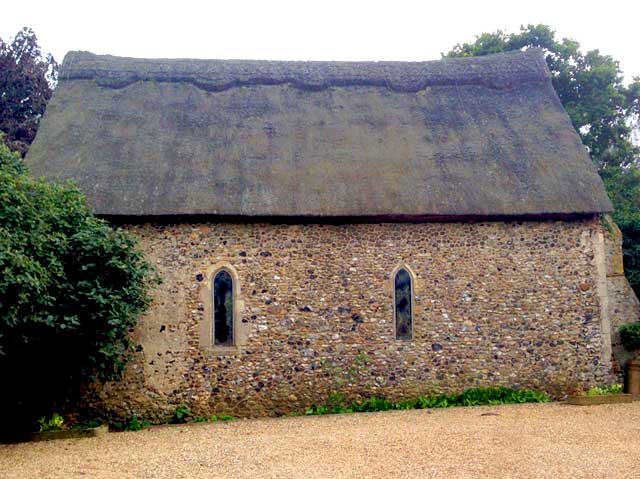 Close to the beautiful village of Kersey is Lindsey chapel. It’s easy to miss, set back from the road along a quiet lane and amidst rolling countryside that resembles Devon more than Suffolk.

Inside, the chapel is empty save for a small table; the floor is dirt, the walls are unadorned; the roof’s oak trusses are exposed.

Its original function was as a chantry chapel for the nearby Lindsey castle. The castle was probably abandoned before the end of the 13th century (nothing remains now except earthworks) but St James’s Chapel persisted. it was used as a barn until 1930, and then handed to English Heritage. Entry is free.

What exists dates from c. 13th, but its foundation may have been c. 12th or earlier. The rectangular plan and thatched roof, its overall simplicity evokes a much older building. Many very early c. 8th and 9th minsters and churches would likely have resembled Lindsey chapel, albeit fashioned from timber rather than flint.

It’s a very still, peaceful place. Standing in its midst, its easy to be transported to a time when the East Anglian Church was still in its fledgling years.