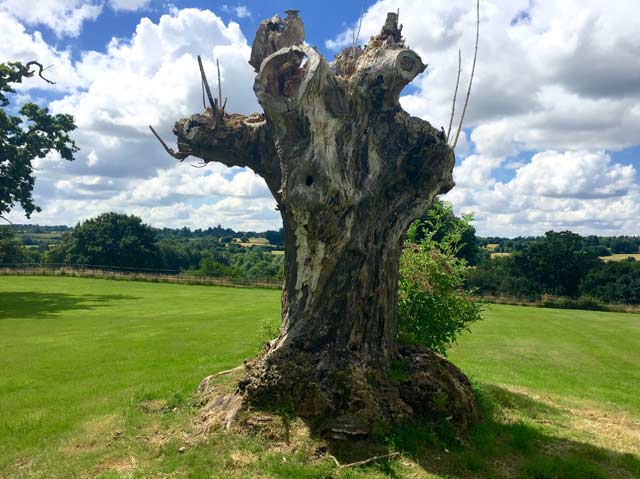 Polstead is a lovely village close to the Suffolk / Essex border. It’s name means ‘place by the pool’, undoubtedly a reference to the large pond that sits at the village’s south-western edge, close to the church.

Between the church and Polstead Hall stands the diminished remnants of the now-dead Polstead gospel oak. Gospel oaks were not uncommon features of Anglo-Saxon village life. They were often located at boundaries, cross-roads or other liminal spaces and, in some cases, likely possessed an earlier heathen significance. During the ‘beating of the bounds’ – a ritualised walking of the parish boundaries by the community – gospel oaks were used as focal points for prayer.

Polstead’s example is particularly notable for its great age. At its peak it was 32 feet round at shoulder height. According to legend, the Northumbrian missionary St Cedd preached under the oak in roughly 653AD. When the tree finally collapsed in 1953, a cut through its trunk revealed over 1,400 annual growth rings, indicating that it would have already been 100 years old during the reign of the East Anglian king Anna, nephew of Rædwald and a descendent of the Wuffinga royal line.

Certain trees were likely regarded as sacred, even sentient, by heathen Anglo-Saxons. Like the world-tree Yggdrasil of Scandinavian myth, trees were symbolic ‘world pillars’ that connected the celestial realms with the underworld and Middangeard – the human domain. Irminsul, stapol and becun are Old English words relating to wooden pillars erected in a cult context as mini world-trees. Similarly, hearg, leah and hyrst describe what were probably heathen sacred groves. So trees were not just venerated for their great age (and wisdom), but because they were a means for tapping into otherworldly powers.

Trees’ mythological status were maintained into the Christian era and absorbed into the Christian message. The Anglo-Saxon poem The Dream of the Rood, for example, cleverly links the wooden cross of Christ with its original status as a living tree. In doing, it draws comparison between Christ’s crucifixion on the tree / cross and Odin / Woden’s hanging upon the world tree.

Given the great age of the Polstead gospel oak, it was likely venerated as a pre-Christian sacred tree prior to its use by St Cedd. There is no denying its dramatic location, overlooking the Box Valley. 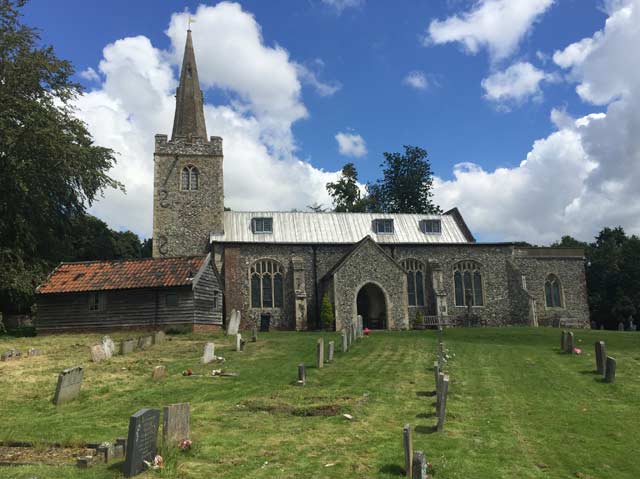 St Mary’s church is close by and worthy of a visit. Founded in 1100, it contains arches formed of probably the earliest English-made bricks in existence, dating to 1160. Its spire is also the only original stone spire in the county. Medieval wall paintings show two wheels, thought to represent the wheel of life or wheel of fortune, but certainly don’t resemble typical depictions such as the fantastic example at Ilketshall St Andrew. If anything, they recall cart wheels – see the wall paintings of Edmund’s Passio at Thornham Parva. Could these wheels also show the same? Unlikely, but who knows…

Visit HiddenEA for more information on the region’s ancient trees.