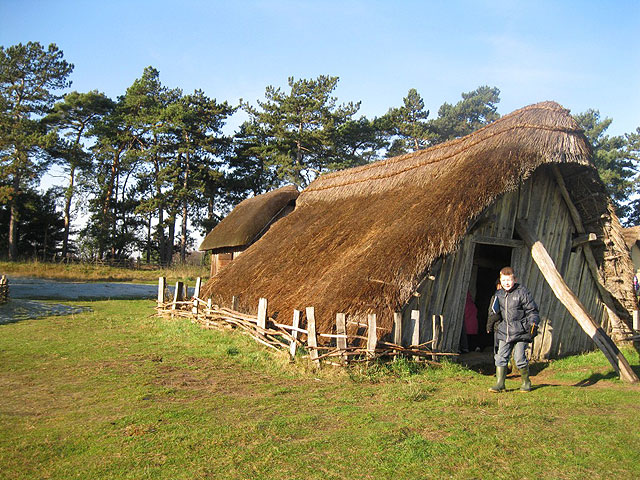 The Anglo-Saxon village at West Stow is an atmospheric recreation of an early Saxon community. But settlement in the area dates back to the Mesolithic.

Along with the area around the Suffolk coast known as the Sandlings, Breckland became the focus of human settlement and ritual activity as far back as 50,000 BC. These districts would have had much to offer settlers: navigable rivers – for trade and communication; natural resources – fish, peat and wildfowl, grazing land; trackways and, perhaps most importantly, flint.

The River Lark runs north through Breckland, joining the Great Ouse and flowing into The Wash. There have been settlements along the Lark valley for thousands of years, at Great Whelnetham, Hengrave, Cavenham and West Stow.

West Stow itself has been a site of settlement from Mesolithic times. The Neolithic trackway the Icknield Way, which connects North Norfolk with Wiltshire and passes numerous ancient earthworks and ritual sites, crosses the Lark nearby. Evidence of pottery industry has been found, along with Bronze Age activity in the form of a bowl barrow located on a low hill in the King’s Forest.

An archaeological dig commencing in 1965 and lasting seven years revealed evidence of a Saxon community. There is further evidence of a cemetery and Saxon pagan temple (which is on the site of current church.)

Today, the early Anglo-Saxon village has been carefully reconstructed where it was excavated. Experimental archaeology has provided new ideas on what life was once like. It promises an extremely atmospheric experience, especially when reenactments take place.

The reconstructed buildings show how Saxon East Anglia eventually developed its own identity compared to northern European mainland. Continental longhouses at settlements such as Feddersen Wierde were long and designed to accommodate both cattle and humans. East Anglian halls were mainly built for solely human use.