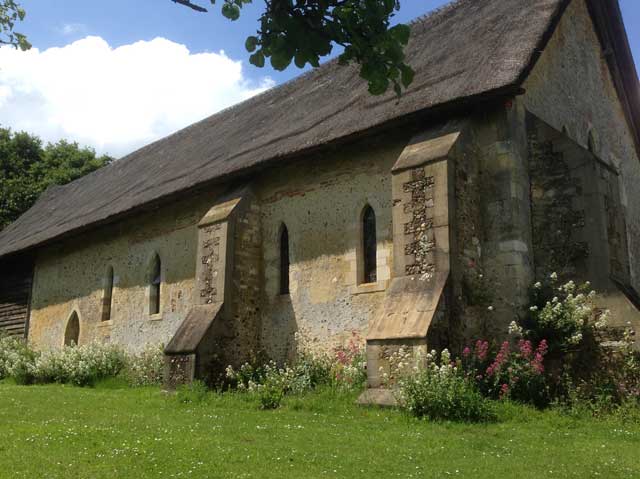 Is this the location of Edmund’s coronation? Along a deserted farm track, hidden amidst woodland and overlooking the Stour Valley, is the ancient thatched church of St Stephen, also known as Chapel Barn.

On Christmas Day 855, Bishop Humbert of Elmham anointed a 14-year-old boy as King of the East Angles. The boy was Edmund and his Coronation was documented at ‘Burva’. The chronicler Galfridus de Fontibus also described the coronation as having taken place at ‘Bures’, which is an ancient royal hill. It is the general belief that this was the lonely hilltop, where St Stephen’s Chapel now stands.

Within are examples of carved ‘daisy wheel’ motifs, found in parish churches across the region. Dating to at least the Bronze Age, the daisy wheel was originally a solar symbol, possibly linked with veneration of the Brythonic goddess Sulis and her Irish equivalent Brigid. The symbol was later appropriated as a Marian cipher. Within parish churches, its use was possibly as ritual protection: magical sigils designed to ward off evil or trap demons within their complex structure, quite literally pinning them to the walls.

The chapel fell into disuse after the reformation; it was converted to a hospital in the plague of 1739 and later became cottages then eventually a barn, hence its local name.

It was restored to its present condition in the 1930s by members of the Probert family and re-consecrated. Once a year each summer, a service is held in the chapel by the congregation of St Mary`s Church, Bures.

Evidence points heavily to this not being the site of ‘Burva’ as a talk by myself to the Sudbury History Society explained. The ‘connection’ was only offered from Victorian times and hinges on place name evidence alone. Bures can be interpreted to mean Bower house, indicating a small settlement, and straight away the Church being for St Mary rather than one for the popular Saint sets the ‘alarm bells’ ringing. The Chapel, is reached by St Edmunds lane..which in the 1930’s was known instead as ‘Deadmans lane’ indicating an old Bier path. Though the dedication by the Archbishop of Canterbury is notable this was far later than the Edmund’s time. There is no way Bures could have ever been considered a ‘Royal Ville’ on the ‘bend of the river stour’ like in the accounts. However there is a large town not that far away that had had a mint and a large population with the necessary richer patrons to give gifts worthy at a Royal consecration (not a coronation). It has Bury in it’s name, with a prefix of Sud given at a later date. It has Chilton alongside it which of course means ‘village of the princes’ and a Kings meadow close by, as well as a Kings hill-there is a Kings street too but this may well relate to one Edmund King who was a grocer there in the 17th century. A Coptic bowl of some quality was found in a barrow near Chilton Hall (detailed in David Burnett’s recent book) underlining there was a regal presence hereabouts that Bures cannot match. It is more likely that the Minster Church of St Gregorys on the Croft at Sudbury, within the ancient Iron Age fort banks and ditches is the location. Those fortifications gave the inspiration for the Burgh name adopted by the 6th century Anglians and the St Gregory dedication is a clue to the importance of the site. As prominent as Edmund would become in the later centuries St Gregory would always have a ‘higher place’ in the pecking order. A study of bricks discovered last year in updating building work dated them to the Saxon period, making them very rare indeed. Of course if a new archaeological discovery suddenly emerges in Bures I am very happy to reassess all my previous thinking! 🙂