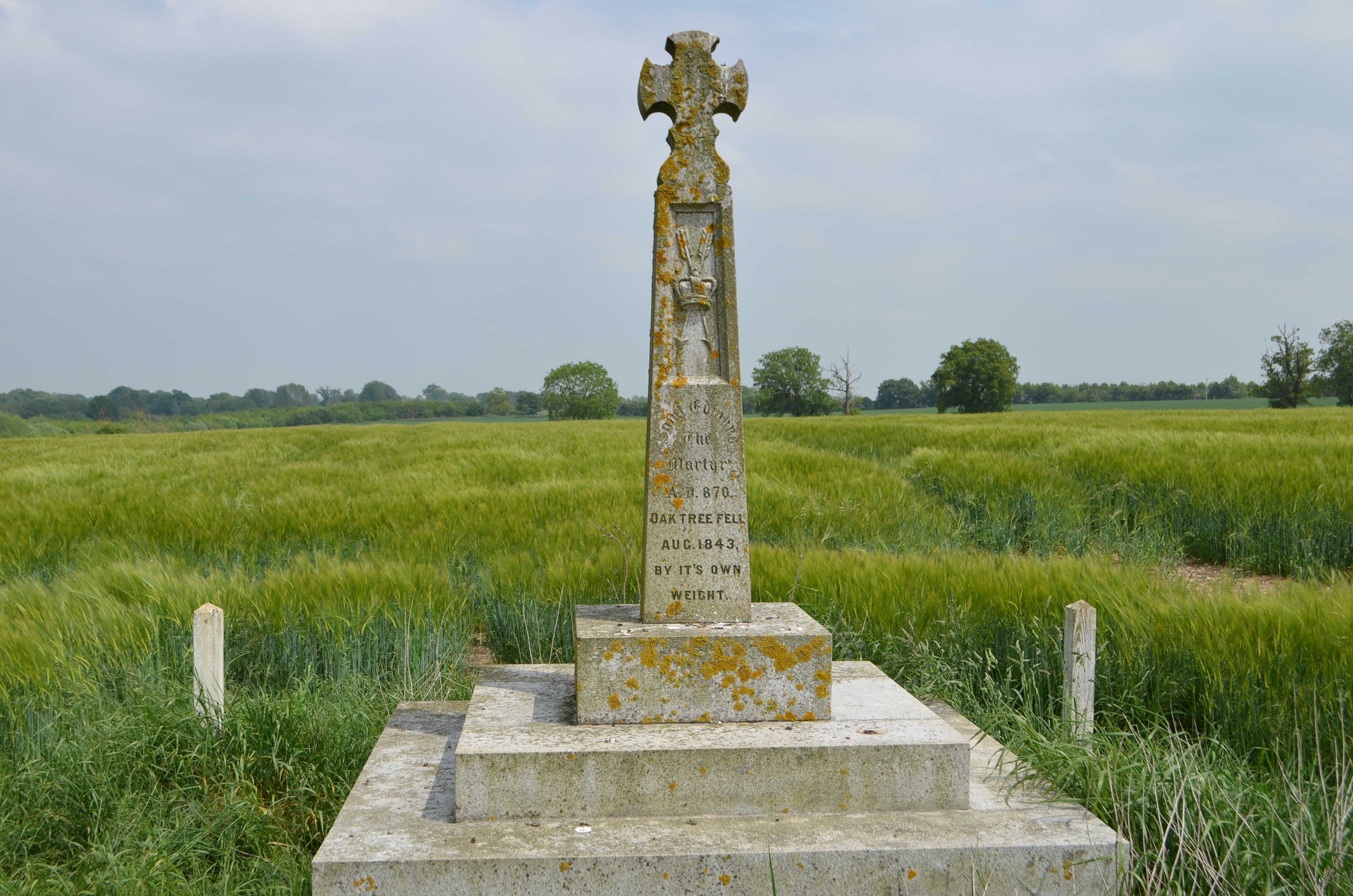 The death of Edmund, king of East Anglia, is recorded by his chronicler Abbo as occurring at Hægelisdun. His burial was at a place called Sutton.

There are a few contenders for the killing-place of Edmund. Hellesdon near Norwich is one. Another good fit for the locations of Hægelisdun and Sutton are Bradfield St Clare, where a nearby field is called ‘Hellesdon Ley’, and a moated house called ‘Sutton Hall’ lies a mile to the south. Both are roughly five miles from Bury.

But Hoxne, close to the River Waveney, remains the favourite. Its claim to being Hægelisdun dates back to at least 1101. With its chapel, healing spring, bridge and memorial of the tree on which Edmund died, this little village has become a focus for traditions around the holy warrior-king.

On 20th November 869, at the age of twenty-nine years, Edmund was brought before the Danish leaders and, possibly in front of his own captured men, tortured. He was tied to a tree and scourged, shot with arrows and speared with javelins until he was covered with missiles ‘like the bristles of a hedgehog.’ Finally, he was beheaded.

Just south of Hoxne village is a stone cross, which allegedly marks the spot of the oak to which Edmund was tied. The memorial reads ‘St. Edmund the Martyr, AD 870. Oak Tree fell August 1848 by its own weight.’

On the road from Hoxne to Cross Street lies Goldbrook Bridge, where Edmund is said to have hidden from the Danes. According to legend, a newly-wed couple spotted his spurs glistening in the moon (or sun) and, as the Danes dragged him away, he cried a curse on all bridal couples who should ever cross the bridge. Apparently until well into the 19th century, many local wedding parties would go the long way round rather than chance the curse.

When his people went looking for Edmund’s body, his decaptitated head was found between the paws of a grey wolf. A miraculous freshwater spring broke through the soil where the head had lain. North of Abbey Farm, on the site of a Benedictine monastery near Hoxne, is a deep moat enclosing a small island on which the very same freshwater spring was said to be found. This spring ‘the occupiers of the field have never been able to divert.’ The ill and infirm journeyed there in the Middle Ages for healing. This tale echoes similar miracles from the lives of Celtic saints, which have their origins in the Celtic veneration of the head as the seat of the soul.

Definitely not. The name Hoxne cannot be interpreted to be derived from Haeglisdun as it comes from the old English for a description of the land there, the ‘spur’ that is like the Achilles tendon running down the back of your calf. Walking with Edward the county archaeologist a few years back in the village (who excavated the Chapel in the woods) he underlined what a ‘money spinner’ the site was in the middle ages. The Bishop couldn’t get the relics from the Abbot at Bury so by a curious coincidence legends suddenly started being associated with the very place he had a Palace…Hmmm…As for the ‘famous oak’, records in the Suffolk Archaeological journal reveal that the association with the tree and bridge are relatively recent stories, which seem to have only appeared in Victorian times. The local landowner then, another Edmund, was a great promoter of the tales much to the puzzlement of the older inhabitants of the village.

As for Bradfield St Clare? It falls down a little from the offing with the land suggested near the Dairy farm being very flat. No ‘dun’ of a rise if we go on place name evidence, and no archaeological finds from the era have ever surfaced. But Rougham is nearby, and it stands to reason that the King and his party would have come this way to first stop at one of Edmund’s halls before making their way to safety with the East Saxons. Joseph Mason has come up with an alternative theory for Hellesdon on the outskirts of Norwich recently and there is a pattern of ‘movement’ for a large Danish force nearby which is detailed in his recent booklet ‘St Edmund’s Norfolk’. Will we ever know for sure? It’s all part of the rich mystery.