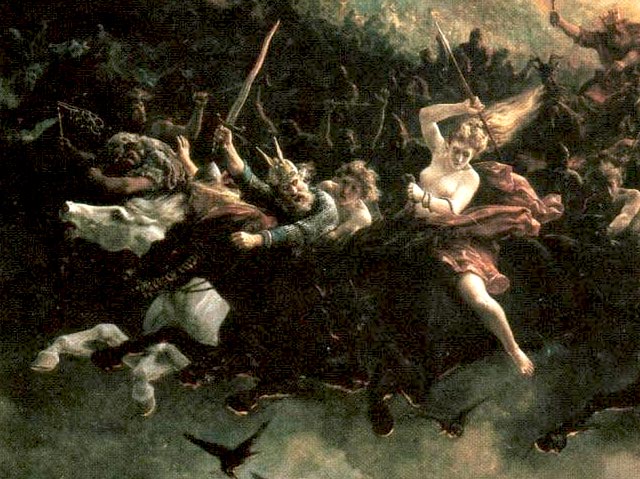 Today – December 22nd 2015 – is the Winter solstice in the northern hemisphere. Midwinter, Yule or Jol was a major event in early cultures, including Germanic and Scandinavian (although some dispute this) for very important, fundamental reasons. In our modern, industrialised societies, we’ve lost touch with these natural and celestial markers, but to understand their meanings can enrich our own increasingly denuded, secularised holidays – Christmas in particular.

The Earth’s axis is angled at 23.5deg to the horizontal; this means that, during Midwinter when the Earth is tilted away from the Sun, the Sun rises and sets at its southernmost points in the sky, and reaches its lowest zenith. Therefore daylight hours are at their fewest – less than half the number of its companion-event – the Summer solstice – at the other half of the year.

At midwinter, the Sun is at its least potent. But in the days and weeks that follow, it grows in strength; the days become longer up to midsummer, when the Sun is at the pinnacle of its powers. Thereafter, its strength wanes and the darkness draws in again until midwinter, and so the cycle continues.

In earlier primarily agrarian societies, the waxing and waning of the sun – marked by the cycle of the seasons and the passage of the agricultural calendar – was critical; the Sun’s influence ultimately determined whether the land was fecund or not, if the harvest was good, if the community prospered. It’s therefore not difficult to imagine how rites and practices built up around the solstices, particularly midwinter; if the sun was not reborn, it could not become strong enough to push the darkness back, ushering in summer and the seasons of plenty. So cultures developed techniques for assisting the sun in its transition.

The winter solstice was a time when gods were born and when deities entered into the realm of humankind. In the classical pagan calendar, a few events occurred at midwinter: the Persian sun-god Mithra was born, and it marked the Roman festivals of Sol Invictus – The Unconquered Sun – and Saturnalia – a seasonal debauch when social norms were temporarily overturned. Sol Invictus was so closely linked to Mithras that people made vows to ‘Sol Invictus Mithras’. This sun cult was a major characteristic of the family of Constantine the Great who, after acceding to Emperor, converted to Christianity in 312AD. Given the popularity of Mithraism and the cult of Sol Invictus, the birth-date of Christ became aligned with these existing major festivals.

In Germanic and Scandinavian cultures, midwinter marks the symbolic resurrection of Baldr – god of light, who was slain by the trickster-god Loki by means of a mistletoe arrow. It was also the day when the gods were at their strongest and the otherworld was more readily accessible; Woden / Odin led the restless dead across the skies in a Wild Hunt, and swooped down to visit the villages and farmsteads. It’s possible that the origins of benign Santa Claus lie in Woden’s midwinter activities.

Records from the mid c. 9th records tell of a great midwinter sacrifice at Uppsala; it was famously described in more detail by Adam of Bremen in the c. 11th, recounting the grisly sacrifice of nine humans in a sacred grove, sacrificed to the gods of the Norse Æsir.

The Anglo-Saxon calendar describes 12 lunar months. The solstices are flanked by two moons: Ærra Liða and Æftera Liða spanned June and July; Ærra Geola and Æftera Geola spanned December and January. Both sets of names translate as ‘before Yule’ and ‘After Yule’, suggesting that a festival of some kind occurred during those periods.

The solstices may also have involved participation by Germanic and Scandinavian regents. In his role as terra mater’s consort, the king may have engaged in some form of heiros gamos or sacred marriage, to ensure the rebirth of the sun and the Earth’s fertility.

Midwinter then has always been a feast of promise, of better times to come: hope amidst despair, light in darkness and birth in death, as part of the eternal wheel of life, death and rebirth as described by the seasons and the passage of the sun throughout the year. The well-known Christmas signifiers: holly, mistletoe, Christmas trees and lights, yule logs, feasting, new-year resolutions, Santa, all have their origins in something much more ancient and fundamental to human life: the Sun.