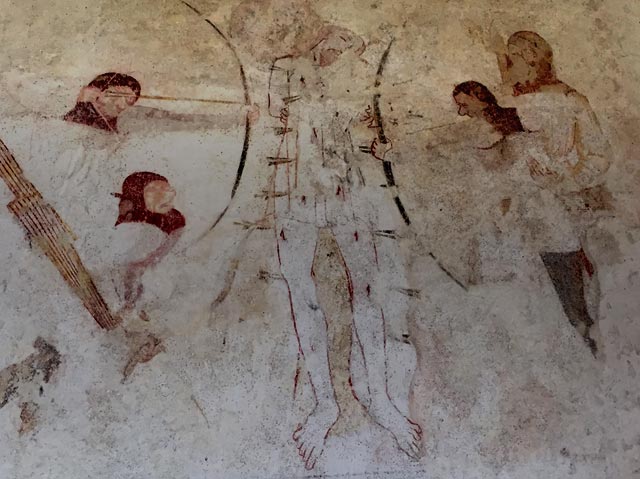 Along a quiet lane in the Suffolk village of Troston lies St Mary’s church. And within can be found some of the county’s finest medieval wall paintings, if not England’s.

Entering through the porch, one is presented with a giant image of St Christopher and the Christ child. It was likely deliberately positioned so as to be visible from the doorway. Depictions of St Christopher had apotropaic qualities; it was thought that anyone who looked upon his image was immune from violent or sudden death for the rest of the day (similarly, a wall painting of St Edmund at Lakenheath St Mary’s blesses all those who enter the church.) 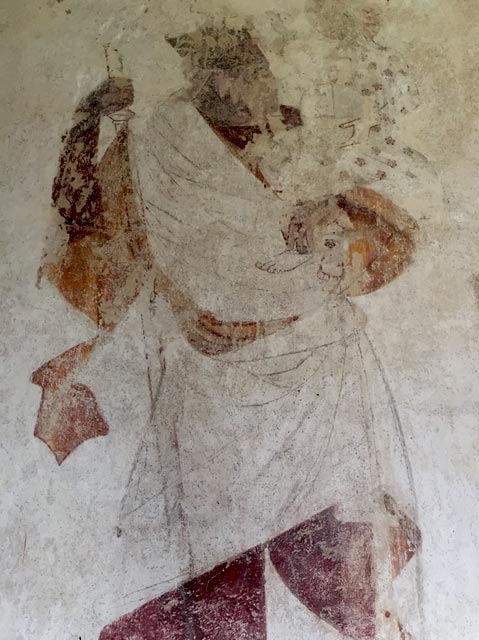 An early painting of St George, dating from c. 1350, is accompanied by a later, more impressive depiction of St George on horseback slaying the dragon. He replaced St Edmund as England’s patron saint when Edward III established a new, aristocratic chivalrous order – The Order of the Garter – in 1348. However, his appearance at Troston suggests a parish affinity with St George, independent of the king’s adoption of the saint. 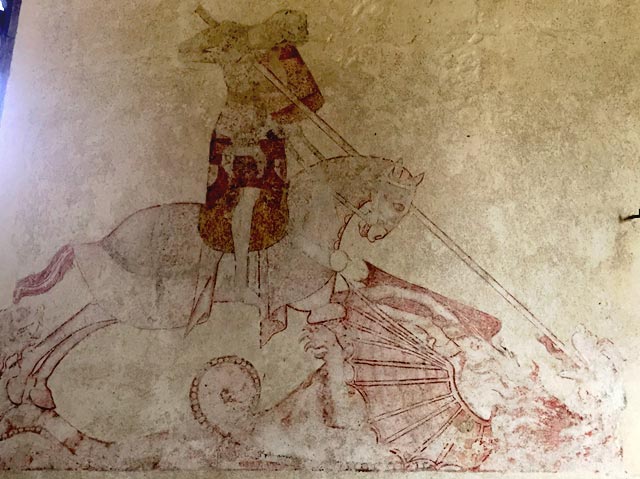 St Edmund’s martyrdom is also shown. He is tied to a tree and riddled with arrows, while four archers in coifs take aim. The painting dates from a few years after the arrival of the Black Death; the timing suggests Edmund was depicted in order to invoke his protection from plague and disease.

Above the chancel is a ‘doom’ painting, showing dead souls cast down to Hell or raised up to Heaven, accompanied by a wounded Christ.

Fragments from a number of painted consecration cross can also be seen, marking the place where a bishop would have blessed the church with holy water.

Aside from the very high quality of the draughtsmanship, these paintings are excellent examples of the medieval use of symbols and images to invoke protection and supernatural aid, for the benefit of the community. Churches were not just places of worship or foci for parishioners but liminal zones of holy power.

The church contains other more ‘grass-roots’ examples of this, in the form of medieval graffiti. Consisting of diverse subject-matter, almost all the graffiti is clustered around the tower and chancel arches. Alongside relatively common compass-drawn and ‘daisy-wheel’ motifs, other graffiti subjects include: ships, heraldry, hands and feet and full-length figures. Perhaps the most intriguing is the so-called ‘Troston demon’. A faintly-etched demon or devil head, barely visible, is accompanied by a more deeply-etched pentangle, positioned over the head. It is thought that this placing is deliberate. The pentangle was historically a Christian symbol, associated with King Solomon – it gave him power over demons. This association suggests the pentangle was purposefully inscribed over the etched demon head in order to ward off or trap evil spirits, as a talismanic act for either an individual or to elicit protection for the whole church. 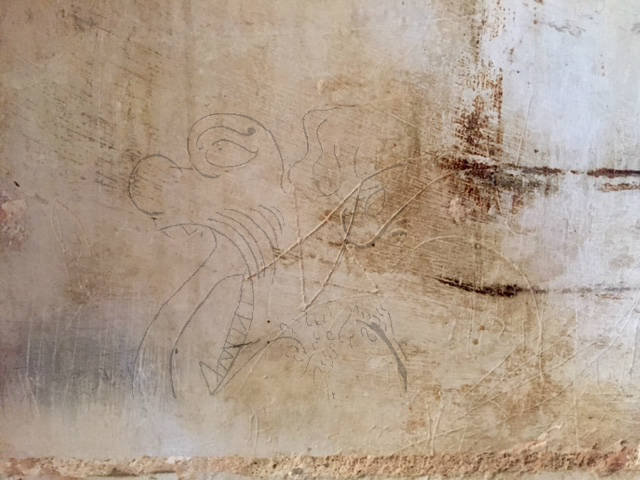 May I suggest that you also visit St Marys Church in Brent Eleigh(1.5 miles from Lavenham)?
A set of three altar paintings executed from 1275 to 1325, with specialists stating these to be the earliest and finest in the country. They require viewing for appreciation. My wife and I are the Church wardens and we would welcome meeting you and showing you. We have visitors from far and wide, and welcome groups.